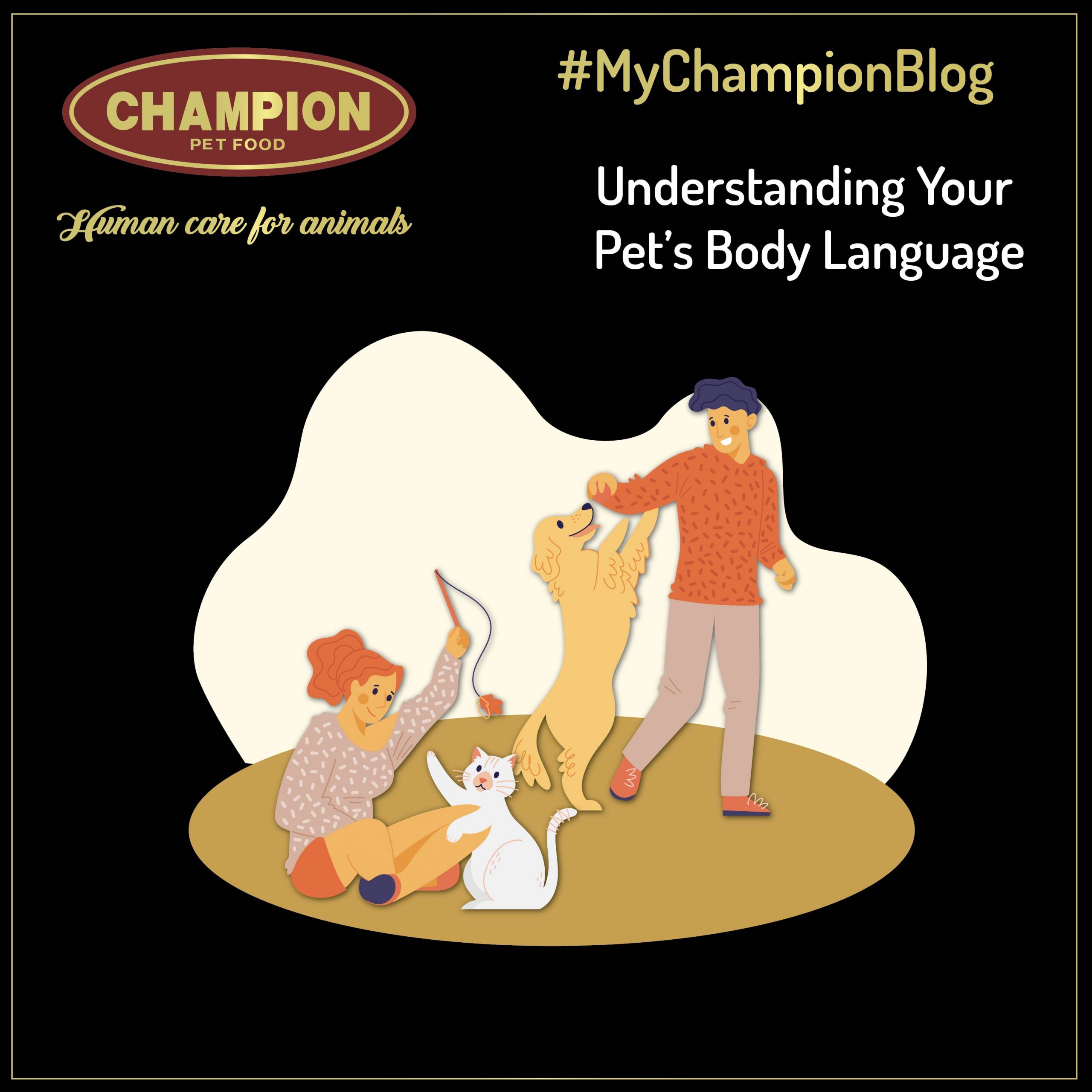 Cats and dogs are excellent non-verbal communicators. They can’t speak to us in our language, but they “speak” to each other and us via a rich vocabulary of expressions that enables us to understand and respond appropriately.

Pets instinctively use a combination of posture, tail position, eyes, ears, and facial expressions to send a message. Although dogs and cats often show emotion in similar ways, there are species-specific differences.

Observe your pet’s body language, compare it with these typical behaviours, and see if your dog or cat is sending you a message:

Happy: Rapid tail wagging from side to side or in circles is a sure sign of doggish joy when ears are in a natural position and the mouth is relaxed or slightly open. Some dogs even appear to be smiling.

Alert: Glance is intense and focused. Ears perk up and angle forward – head and neck are erect or slightly cocked. Posture is upright with the dog’s weight distributed equally on all legs. The tail is stiff and still.

Excited: Weight shifts to back legs as a dog readies for action. Ears are up, the tail is held high and mouth may be slightly open in anticipation.

Friendly: A friendly dog will look up at you and may jump up on you or bring you one of its favourite toys.

Playful: A dog who wants to play, may first stretch into a bow to let you know he’s up for fun and will show you some bouncy moves. He may also, nuzzle or paw at you and then take off running in the hopes you’ll chase after him.

Afraid: Scared dogs appear to cringe and shrink in size as their ears flatten out and their tail descends low or goes between the legs.

Submissive: Submissive dogs try to make themselves look small and they walk low to the ground. They tuck their tail low or between their legs while avoiding looking at another dog or a person in the eyes.

Dominant: Dominant dogs are standing tall and looking large as they tilt their body forward. Their tail is high, ears are up, and they look at other dogs or people without blinking their eyes.

Aggressive: When a dog is aggressive is staring at a person or an animal unblinkingly. Posture is intimidating, with weight shifted forward. Their tail is raised high while exposing its teeth. The dog may vocalize with low, threatening growls or barks. Try to avoid them without staring back to them.

Happy: When cats are happy their eyes are closed or half-shut, as their ears are angled forward and their tail is up. Their fur will be flat and they may begin to purr, stretch out, rollover or knead with their front paws.

Alert: When they have their eyes wide open and their ears subtly tipped forward that’s when cats are on alert mode.

Friendly: Cats that are blinking slowly indicate affection and contentment.

Playful: It’s time for a game. Cat’s ears are open and tilted slightly forward as its tail curled upward indicating that it’s willing to engage.

Afraid: A fearful cat tucks his tail low between his legs, shifts his ears sideways and his pupils widen. When they are afraid, they want to be anywhere but there and may run away in order to find a safe spot.

Submissive: Submissive cats are starting to crouch and getting small while their ears are getting flattened.

Tense: To show their tense, cats are narrowing their pupils and see their tail standing upright while vibrates almost imperceptibly.

Angry: When you see a cat’s ears getting flatten and point upwards, its pupils narrowing, its whiskers pointing forward, and its tail beginning to thrash something has probably bothered her. Also, its back arches, fur stands on end, and claws extend. It’s time to back off!

Defensive: Cats’ behaviour is defensive when their pupils are getting shrink, their tail twitches. Their response to a perceived threat is by growling, snarling, hissing or spitting.

Remember, once you understand what your pet is saying, you will develop a deeper bond of trust and respect. Plus, your newfound understanding of your pet’s emotional state will help you predict their behaviour and prevent problems before they occur – protecting both of you from dangerous situations.